What is Current Transducer

Current transducer is a device, which converts current into a proportional industrial standard electrical signal. 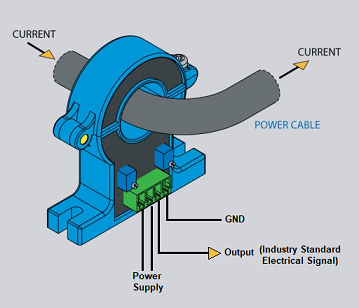 The current goes in, usually it is current, voltage, frequency, power, etc. Then the sensitive component will detect the electrical parameter and give a signal.
After that the signal will be passed to conversion component, which can convert the signal to a small current signal. Then it will be passed to conversion circuit, which process the small current signal and provide an industrial standard electrical signal, usually is 0-5V, 4-20mA, RS485.
At the end the output signal goes to terminal equipment, such as display, PLC, alarm unit, automation control, etc.
Current transducer usually has a power circuit, which provide the power to conversion component and conversion circuit.

Why current transducer is important in many different industry systems?

When current transducer suffers high voltage or current impact, it will go into protection mode, cut off conversion process, totally isolate between input and output. So that it will keep the safety of terminal equipment, keep the whole system safety.

A power system requires some form of instrumentation to monitor and control its operation. In the past, this function has been performed by electro-mechanical devices. With these devices their use was limited by being confined to close to the point of measurement. Replacing these mechanical devices with their electronic equivalents has allowed the monitoring system to become more versatile. A modern system usually involves the transmission of information from the point of measurement to other points where this data is processed, recorded and used to control the system parameters. The conversion and transmission of physical parameters on the system requires the use of transducers at the points of measurement. These transducers act as the interface between the power system and the measurement system. Current transducers are specifically transducers for converting the raw voltage and currents in a power system into useful and meaningful electrical signals which can be used in and transmitted about the measurement system. The inputs to these devices are usually currents and voltages from instrument transformers such as current transformers (CTs) and voltage transformers (VTs) whilst the outputs are standardised DC currents (0-5V or 4-20mA) or digital signals (RS485).